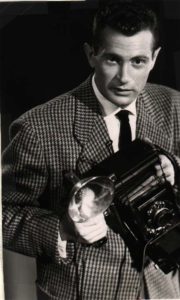 The adventures of Casey, crack photographer for The Morning Express,
were told in this series, which moved to television after a highly successful
run on radio in the 1940’s. Casey hung out at the Blue Note Café, where the
music was provided by the Tony Mottola Trio, and was friendly with Ethelbert,
the bartender, to whom he recounted his various exploits. Richard Carlyle and
John Gibson portrayed the roles when the series premiered in April, 1951, but by
June they were replaced by Darren McGavin and Cliff Hall. Ann Williams, a
reporter on The Morning Express, was Casey’s girlfriend. During the
summer of 1951 he acquired a partner in cub reporter Jack Lipman,
who wrote copy to go with Casey’s pictures. This live series was set in and broadcast from,
New York City.

Early Series Description: Casey was a photographer for the Morning
Express, but he spent most of his time solving murder mysteries with
reporter Annie Williams at his side. He enjoyed great rapport with
long-suffering Inspector Logan of homicide and the entire group commiserated
with Ethelbert, the bartender at the Blue Note Café. The program was first
heard under the title of Flashgun Casey in 1943 and remained on the air
until 1955.

Early Notice: “Richard Carlyle was the initial Crime Photographer, so two months after the premiere, Darren McGavin was brought in as Casey. Backing him up was Cliff Hall as the bartender and Jan Miner – now famous as “Madge, the manicurist” on liquid dishwashing commercials – as the girl reporter. McGavin’s acting efforts managed to keep the series on one more year. Casey left television in 1952, but stayed on radio for another four years.”

1952 notice: Although McGavin is no newcomer to television, he
hesitates to mention that he starred in “Crime Photographer,” a series
that ran briefly during the early days of television.

“The cast of Crime Photographer didn’t go down fighting,’ McGavin
said. “They took off for the hills. It was so bad that it was never re-run,
and that’s saying something when you recall the caliber of television programs
in those days.”